What Railroad Workers Need to Know About the FELA 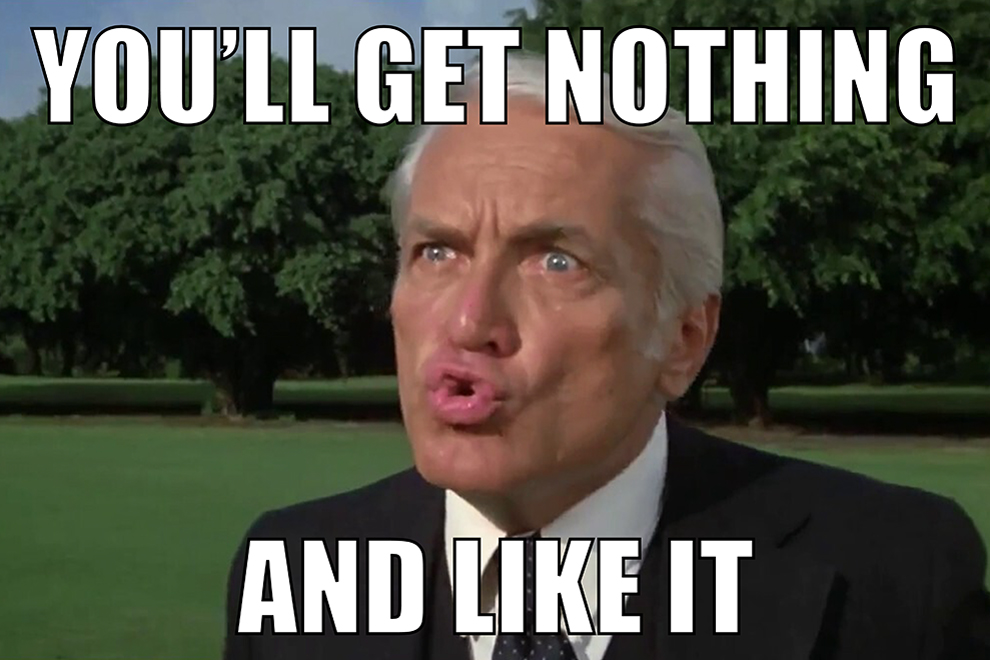 “You’ll get nothing and like it!” Judge Elihu Smails, Caddyshack (1980)

I could happily get through most days doing nothing but quoting Caddyshack. I’ve already been distracted for the last 10 minutes by looking up video clips and quotes from that cinematic classic and giggling to myself. But what the hell does it have to do with the title of this post? Well, at one point in the movie, Spaulding Smails, the lazy, spoiled nephew of the esteemed Judge Smails (played by Ted Knight) is attempting to order one of just about everything at the snack shack. Judge Smails grabs him by the arm and scolds: “you’ll get nothing and like it.” If you get hurt working for the railroad, there’s a decent chance you’ll hear the same thing from the company. But fear not my friend, I’m here to help you avoid that outcome.

The first thing you need to know is that, as a railroader, you are not covered by any traditional worker’s compensation insurance. A little more than a century ago, and for reasons I won’t get into here, Congress decided to give you an ability to recover for your on-the-job injuries that is different from about 99% of the rest of the workforce in this country and they called it the Federal Employers Liability Act. Where most people who get injured on the job are more or less guaranteed a percentage of their pay and their medical bills paid through worker’s comp insurance, you are basically in the same position as someone who gets in a car wreck. That is, you have to show that the company was negligent in causing or contributing to your injury. So at the outset you are guaranteed nothing - no pay for lost time and no coverage of your medical bills. #thankscongress. Stay with me though, it’s not as bad as it seems.

See what’s happened here? I’ve now ripped off a Rodney Dangerfield quote from the 1986 epic “Back to School.” But the point is just as applicable to you if you’ve been injured on the railroad - if you don’t take care of yourself first and foremost, you may find yourself in deep shit. From the moment you get injured, the company is working overtime to avoid blame for your injury and, even worse, to find ways to blame you. In other words the company is not looking out for you and, sad as it sounds, you should not assume that anyone from management is there to help. You should have a plan in place with your family and/or friends in the event you get seriously injured and are unable to look out for yourself. The plan should include that you will not give any kind of statement to the company about your injury until you are physically and mentally stable and have had a chance to seek advice from a lawyer.

In the first bullet point I wrote that it’s not as bad as it seems and then I went on to write a pretty dark portrayal of the whole situation. It certainly can be dark and difficult but if you look out for #1, then the odds of things working out for you increase dramatically. And most importantly, you are not alone! There are good lawyers out there, this guy included, who will talk with you (free of charge) about your situation, explain your rights, and help you make decisions on the best course of action. Sometimes the best course of action is to hire a lawyer and let him/her take that burden off your shoulders so that you can focus on your health. Other times you may be best served working out a settlement with the company on your own and avoid paying a lawyer. But knowledge is your power so take the time to accumulate as much as you can before making any final decisions.

There are some really great laws on the books for railroaders that are designed to give little old you some major league power against a billion-dollar company. Used in the right way these laws can flip the script and put you in the position of strength when negotiating a settlement of your injury claim. But they only become rights if you know about them and use them. Remember, the railroad deals with thousands and thousands of injuries every year but you only (hopefully) have one in your career. Take care to make sure it’s done right!